Apparently there are quite a few little sharp bits on my new polo bike. It also does not turn quite as tight as the old one. The concrete in Taupo turns out to be pretty tough but I wasn’t about to give up the fight.

I now have two nicely busted up knees. Road rash covering most of my right elbow. Half a dozen cuts on my legs and some quite tender ribs. Oh, and I seem to have misplaced a largish bit of skin from my left big toe (How?!?).

Once again, Taupo Tapout was a huge success and the T-Town boys pulled it off without breaking a sweat despite the fact that one volcano had already erupted and a second was threatening to.

My trip started last Wednesday. 4am to ride to the airport and get checked in at Sydney which is notoriously fickle. I got threw mostly okay but my well loved passport is being called into question more and more. To the degree this time that I was offered an on the spot refund as she was convinced New Zealand would not let me in. The ride into Auckland was as unpleasant as last time, except I was on a smaller gearing so it took 2 hours.

I stayed with a friend in Auckland who lived in one of the coolest communal houses I’ve ever been to. I’ve lived in a couple communal houses that couldn’t touch this with a poo covered stick. Good people, good food and an overall sense of social responsibility.  Played some pickup that night, out for drink, repeat Thursday with beach and riding around Auckland.

Headed for Taupo Friday morning with some of the Auckland polo crew. Nice drive and stopped in, sorry to make you jealous, Hobbiton. Friday night pickups in T-Town and partied back at the hall.

The post tourny shenanigans is what really makes the Tapout of the best. Thermal springs in the river, thermal springs in the lake and all a close ride across town. And since there has been so much volcanic activity lately the lake was especially nice. Or probably just by comparison to gale force winds of last year.

Thats all I got. I’m hurt, I’m outta here. Posts coming soon, new touring bike, plans for Tasmania tour next month, next years NZ tour and a stupid plan to get one more stamp in my passport. 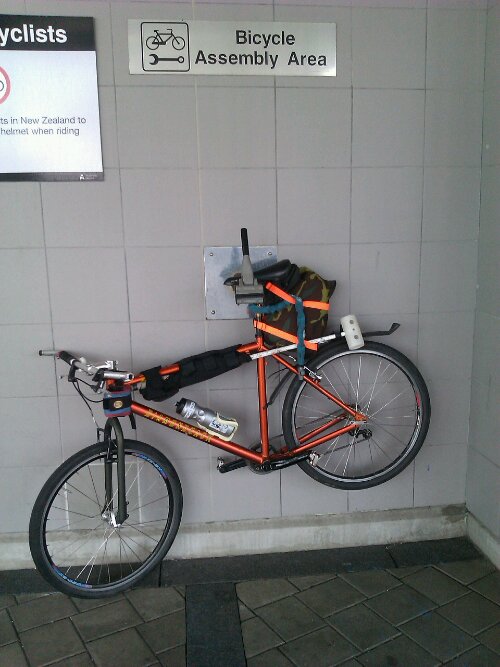 This is some progress right here. I am happy to see more bike stations at airports. This one is at Auckland International. The first one I had seen was at PDX. Hopefully I will continue to see more. I am back in Auckland and headed down to Taupo this weekend for Taupo Tapout II. I placed second in this tourny last year with two noobies. Since then one of them has been training non-stop and I have the pleasure of having him on my team again. Taking up the third spot is Sydneys own V. Looking forward to a weekend of shinanigans with good friends.