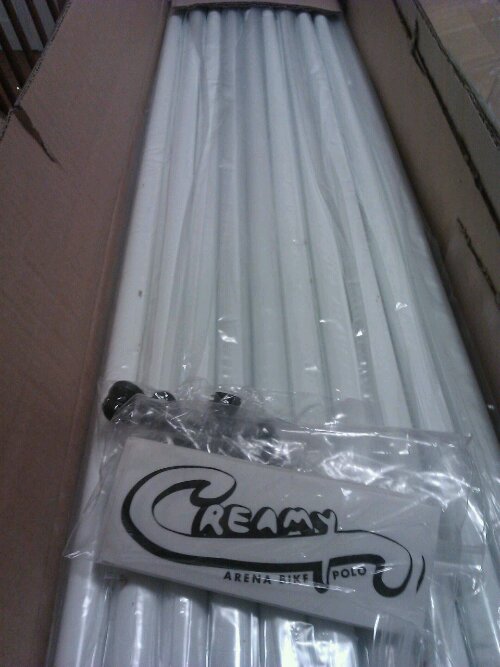 San Francisco local bike polo player Chris Arena has created some very nice custom shafts and heads under the name Arena Bike Polo. We have been talking for quite some time, in fact before he ever received the shafts or I even had moved to Australia about getting a load over here to sell. Shipping things to Australia is very expensive so it made sense to have a large quantity sent here then sold in the country to keep shipping costs down. After some efforts a decently inexpensive but fast shipper was found.

These should be arriving by the end of the month and I will begin shipping right after the start of June, right after returning from Christchurch for the Winter Wack III.

Even with finding a decently shipper it is still quite expensive. So the pricing will be slightly higher than buying from Arena in the US but will still be dramatically lower on shipping costs. Pricing will be as follows.

I’m encouraging local clubs to do group buys, you will get them for cheaper and save on shipping. I will start taking orders right now and taking payments just before shipping will commence. Order HERE!

Yeah, I Wanda how long it will last. 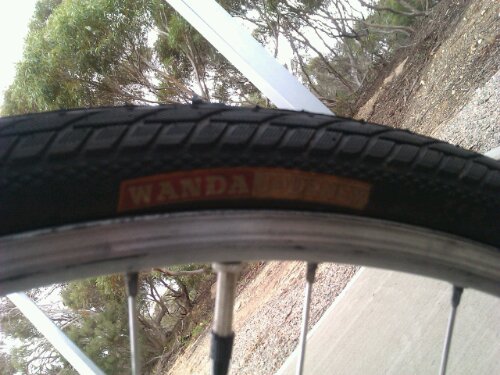 I picked this tire up a couple of weeks ago after tearing my front tire open (again) on a dirt descend. Never heard of the brand but had a nice fat Made in China on the side. I liked the profile but the rubber looked questionable. It lasted a lot longer than I expected but over the last couple of days I notice the rubber was wearing quickly. Thought it would still get me home but today it start opening in two spots! I was just about to pull off in Goulburn to invesgtigate the noise when the tube blew. Derp. New tires, ready to roll. Two more days to Sydney.

I arrived in Canberra late this morning after a bit of a difficult day yesterday. I thought I was going to have plenty of time yesterday leaving around 930 having 115km to do. I was more climbing still to do. I had been led to believe it was relatively flat, with about 300 meters of elevation difference. Turns out I did 873 meters of climbing and didn’t make it into Canberra.

I ran out of light 35km south of Canberra. I’ve had a tactic for a while to find a decent camping spot in these pastoral areas. Find a drive was, ideally where the house(s) cannot be seen. Ride up it until I hit the property line fence. There is almost always a path leading off one direction or the other. Find a hidden place to camp. This went really well last night. I was a bit close to the path but usually this isn’t a problem. one or two cars will usually drive in after work, I haven’t been notices so no big deal. There was an exception this night. Apparently there was a party going on this night and there where calls coming and going for hours. Normally I’d just join a party, but these folks sounded like…. no my type. Anyhow I wasn’t able to sleep and people where parking pretty close to me, yelling, pealing out in the gravel and generally doing what…. not my kind of folks… do. Once the neighbour (must have been a big fella) yelled at the top of his lungs “Shut the *FRONT DOOR*, people (like me) are trying to sleep!” the party died down. This didn’t help the sleeping situation as it was friggin’ freezing! I woke up to ice in my tent, frost on everything outside and generally cold ass misery. When I arrive at Tom’s house I learned it had been -3.8C! I cannot ever think of a time when I was in anything colder. Snow boarding in Tahoe? 48F. January in Karlsruhe, 0/-1C. -3.8C! I pushed on quickly so to get warmed up. Started riding around 9am (no alarm). Had some delicious pies and catching up on stuff and things now.

In just a couple of days I will arrive in Sydney. Around 300km to go. And with as much fun as I’m having I’ll be glad to be done. It will be nice to get some other things done and get back to playing polo. This will also give me the opportunity to document the whole journey and finally upload all my pictures. Another big post in less then a week. Brook, you at the beach with my beer? Sorry I’m late.

The last couple of weeks have been a bit on the nitty gritty side. Basically since leaving Port Augusta I’ve been riding on the highway. I decided on Sunday I would head east rather than back up north to Adelaide. I wanted to camp at the Gampians but the thought of going further from Sydney wasn’t a very desirable one. After I picked up a map of Victoria I discover huge amount of parklands to the east. East it was then. I’m in Orbost, Vic now and about to start heading north. Sadly the nice weather didn’t hold out and I will be seeing rain in the next couple of days. Maybe even snow at the top of the climb. Over the next couple of days I’m going to ride a meager 170km, riding short days then camping and hopefully some hiking. Next major stop is Camberra sometime next week. 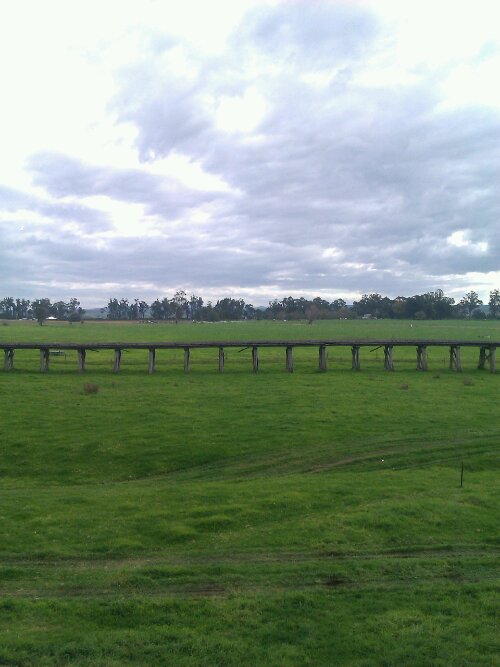 Three years after having my first tourny in Australia I have finally made it back to Melbournes lovely Flagstaff Gardens for another fantastic weekend of polo. Brook flew down from Sydney and I arrived Thursday morning after taking the train from Horsham (more on on why I was on the train later). I ran some errands Thursday & Friday. Stopping by Jetnikoff Bicycle co. to chat with William about building me up a loaner polo bike. We slapped it together Friday evening before I headed off with Rob Moss and enjoyed some of his fine homebrew while he got stuff together for the tourny. Then off to a party for one of the local players moving to Tokyo. Upon arrive at the party we immediately began heckling Benee to play with us and before even saying yes the smile on his face said it for him. Morgan, Brook & Benee: The Dog Particle.

We started Saturday morning off like being shot out of a still drunk particle accelerator. Despite all my efforts to be as hung over as possible it seemed nothing could upset the Particle.  7 games, 7 wins. The Dogaverse seemed unstoppable.

Sunday started off oddly. There was something missing…. maybe that rhythmic pounding in my head that is usually the cadence at which I stumble through a tournament. Had gotten a good nights sleep done me in? Naaaahh, we did just fine.
First game was against The Narwhals. Poor DFL team, but they had good spirits about it.
Next up was Polo Beer. Bart still being a bit sore that we got Benee. Took them down as if The Dog Particle did not even know what physics was.
Then Melbourne Anchor (I kid, I kid). We decided to get hella(!) pumped for this match. Threw on some Gamma Ray right before the start and I was off. Sadly my break could not seem to keep up with me. We where all over the place and got slapped down for it. 5-1 Anchor I think. Ouch.
This dropped us into the “Not Winners” bracket and we played Seagull Archy? They explained what it meant many times but I don’t think anyone got it. It just confirmed for me lefties have no souls (love ya!) and… I aint afraid of no lefty bullshit.
This is the part were we where in the final. The Dog Particle v. Melbourne Anchor. This was probably my favorite game of the tourny even though we lost. 3-5 but it was a fight. An enjoyable one at that. Probably should have heckled more. meh.

Great tournament once again. Thanks to Rob, Sam, Robbie, Belle and everyone else who helped out. Thanks to Benee for joining the Dogaverse, cannot wait for WWIII in June.