I cannot fall back asleep. For the 3rd or 4th time. I’m hungry. As someone who has a terrible time waking up I actually like jetlag on the return trip, wide awake before 5AM? Yeah, okay.

With being awake I had enough time to not only get some thing done around the house (dicking around) but to ride to work arriving an hour early. See, jetlag is productive. And what a ride it was. Not pushing particularly hard I bested my pre-BTG2018 commute time by 2 minutes! How do you like that?!

My commute is great even if just on the edge of difficult to do daily. At about 12.6km (7.8mi) and 475m (1560ft) when not in the best of shape it can be a chore. But the end in the Redwoods is worth it, so just keep the fitness up right?

I was treated to this oddity on the final stretch of West Ridge Trail. Rumors around work is it’s some sort of closet burner project, sure hope not.

Sooooo….. Ya know how I was talking about Shitty Hike-a-Bikes, well seems ol’ WOW Airlines is a fan of my work and read that, then decided to do me a solid and loose my bike so I didn’t have to schlep it on BORT. Geeee, thaaaanks. They also decided to not tell me, so I waited nearly 2 hours at the hell that is SFO  with not an employee to be found. Finally got someone on the phone to put in a claim, but it still feels like they just punted me off to shirk responsibility. No update as of yet. OK, being that I’ve been up since 5am again, time for some other early morning productivity. Have fun and fuck WOW Air!

The last time I was in Basel was for the TriCMC in 2009. This is a great event in which they find the best courier from Switzerland, France and Germany. I’d come along with some friends from Karlsruhe to play in the polo tourney and joined the race for fun. I do not recall doing well and dropped out after loosing a delivery.

I came a day early so I could catch up with the infamous Ström, who is to be away for the weekend. Thankfully he’s letting me stay at his apartment while on a…. Ahem, strategic planning retreat? Ah the things you do when in charge. He’s now the owner and CEO of KurierZentrale, for which he’s work for nearly 20 years. A huge accomplishment. Congrats buddy. 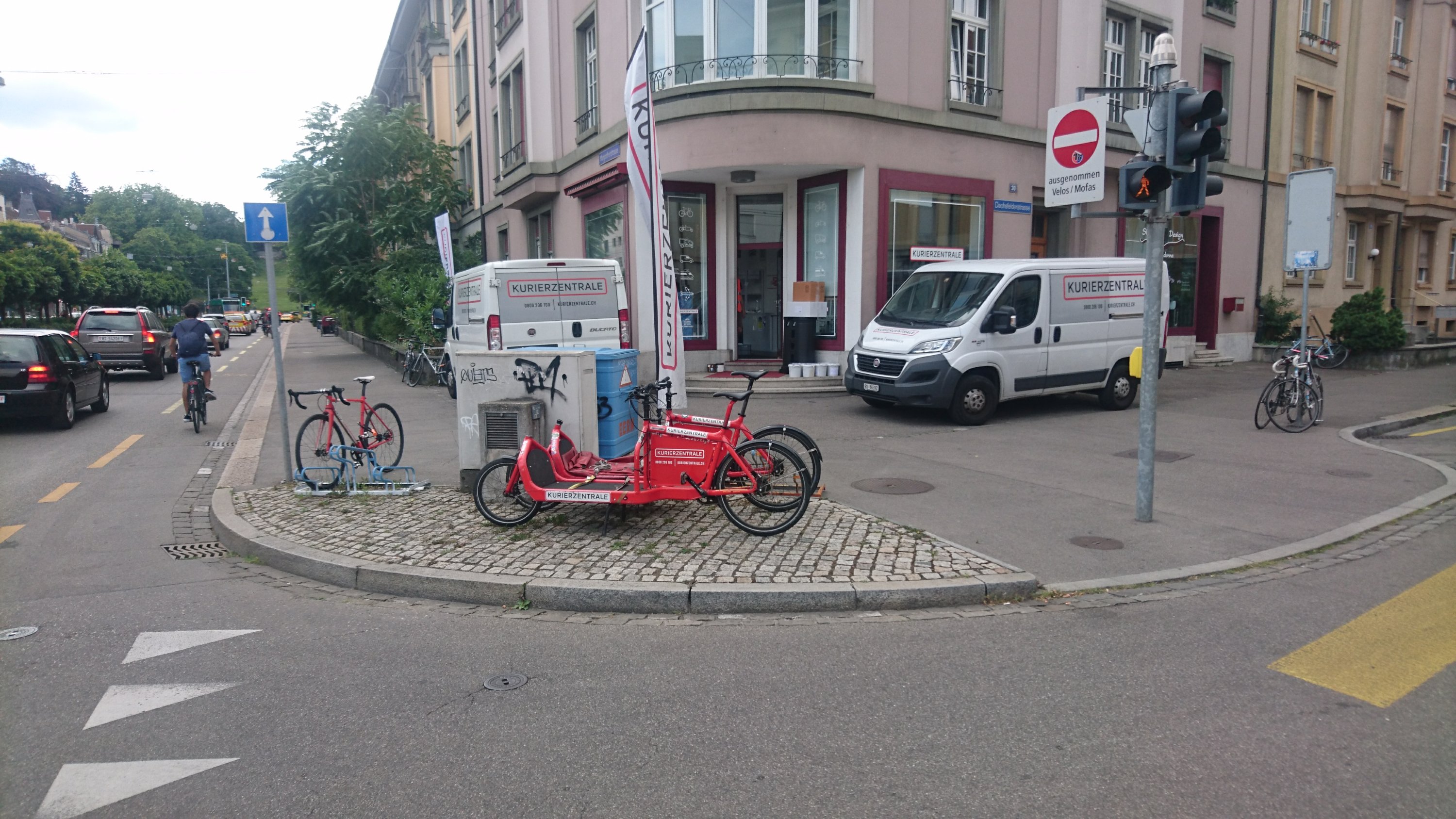 Plan for today is to mostly relax. I’ve a couple last minute supplies to get. If it gets hot today I will go for a swim in the Rhein, otherwise tomorrow should due. I will take many pictures of fountains I expect. 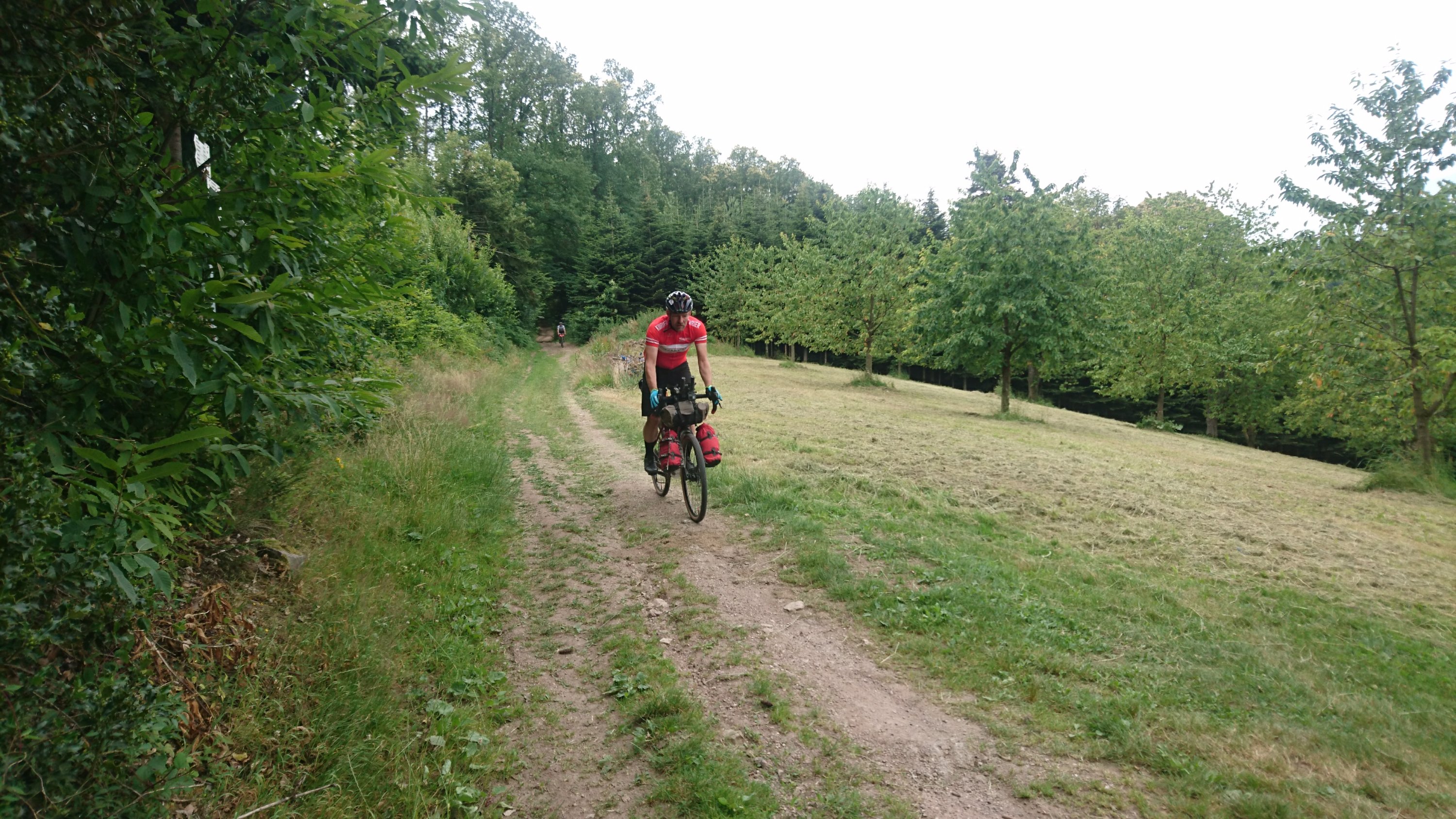 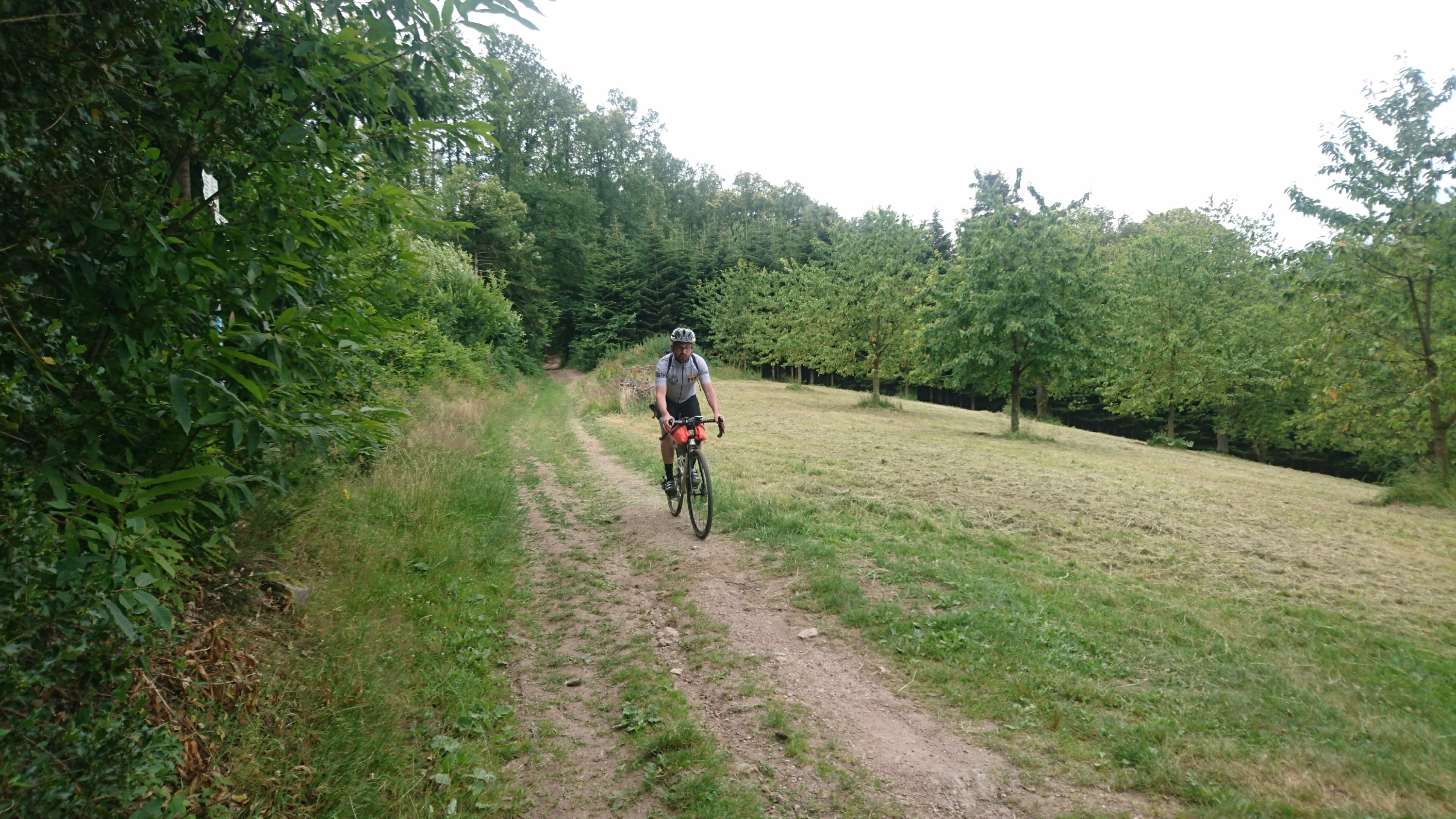 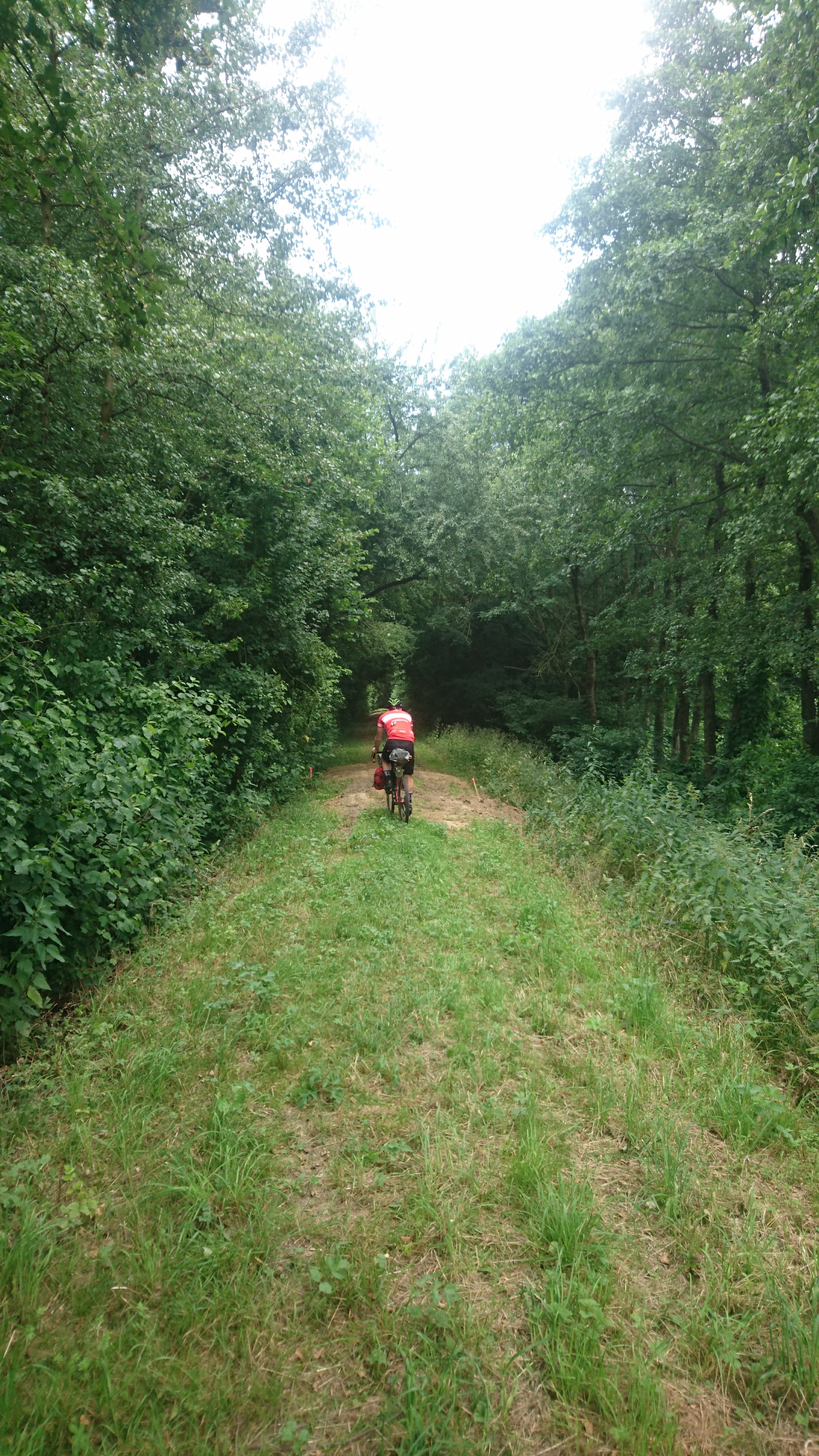 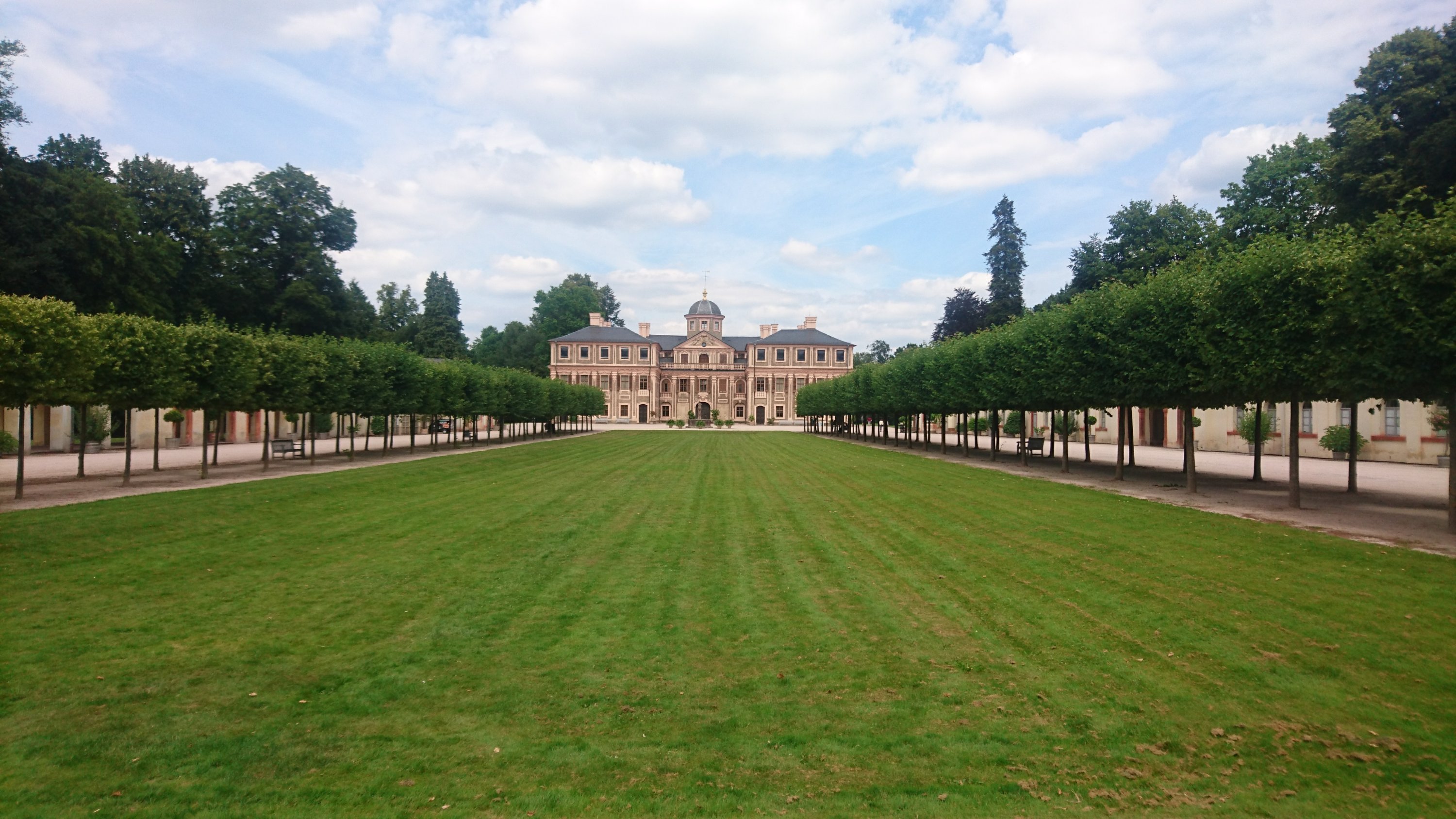 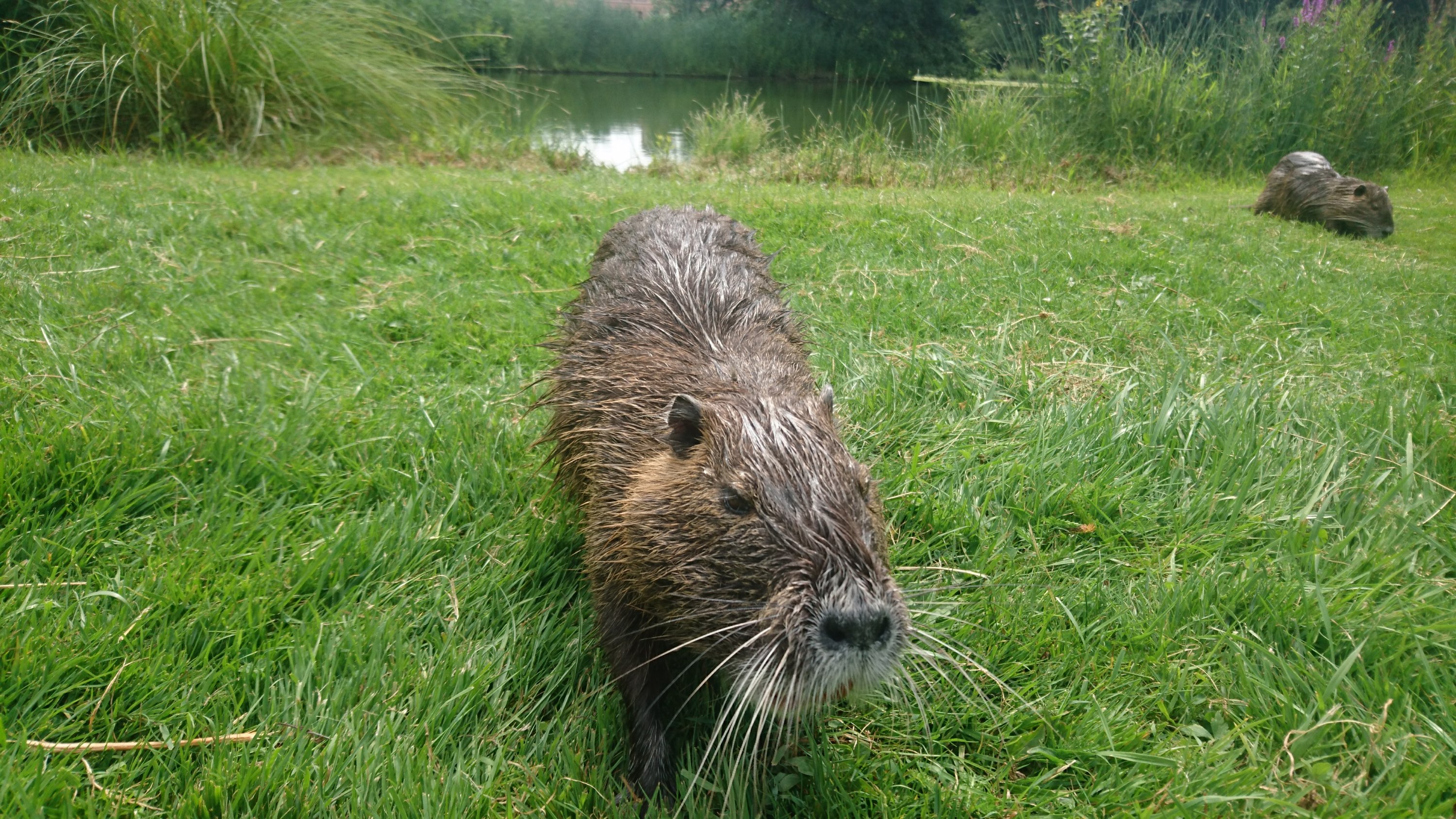 I’d somehow got it in my head I that my flight landed on Friday and I had to jump on the train straight away. Thankfully I was wrong and I could visit with some friends. That also meant I had to get in touch, which is increasing more difficult and I move away from centralized “social media”. But things worked out, I got a place to stay Thursday night and had plenty of time to visit folks on Friday before my bus.

One of my favorite parts of coming to Germany is that you cannot drink too much coffee. So I, as usual, celebrated this fact. This time with a very beautiful espresso machine made by my friend David with help from the house-mates. They’d cobbled together parts from various machine into this stunning brass enclosure. Has all the features of a fancy machine like auto water filling and a nice powerful pump. 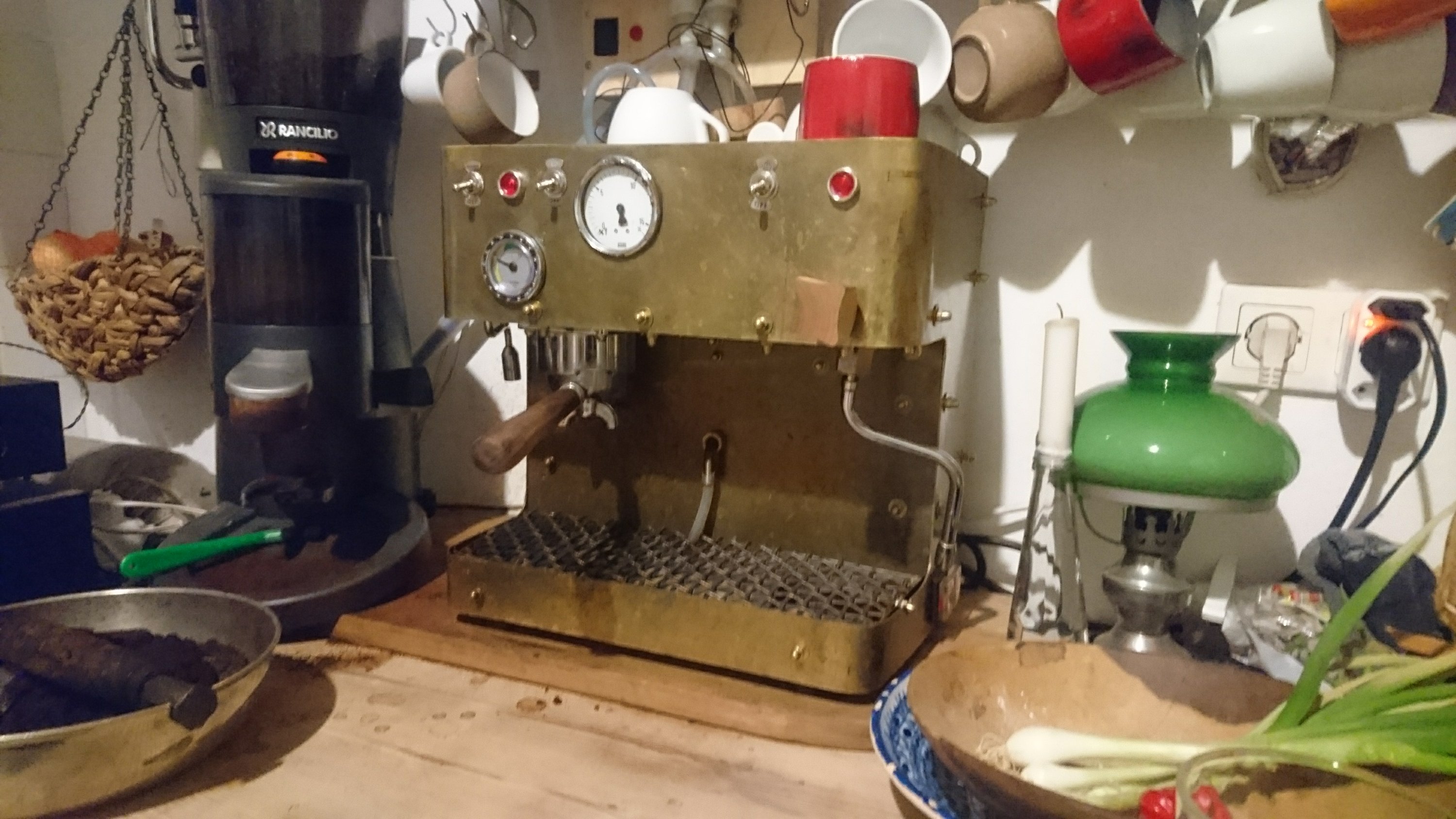 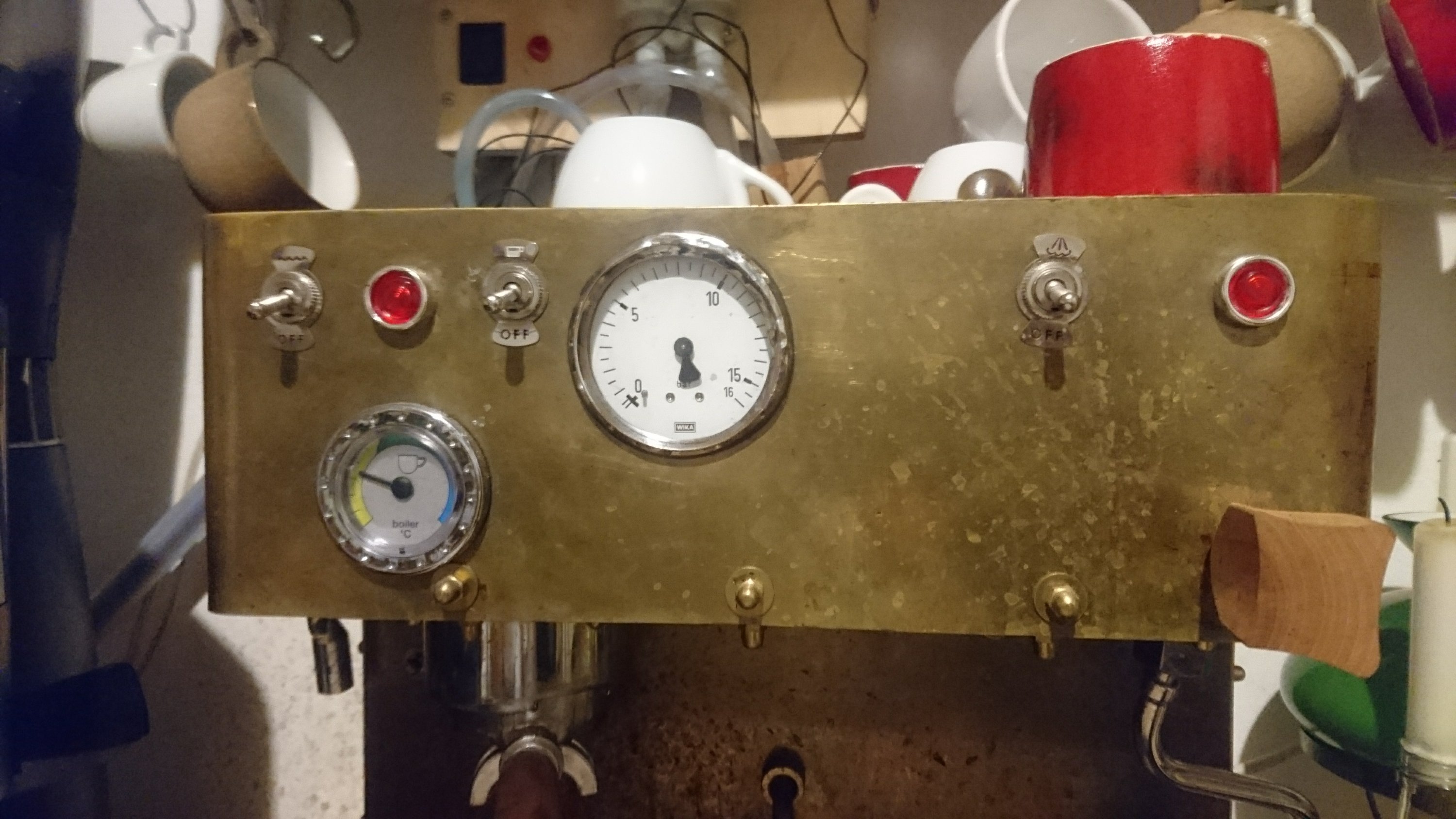 I’d forgotten a couple small parts so Fridays top agenda item was finding, most importantly the proper bolts and plates for my cleats. We visited Parrots and Crows a new shop since the last time I visited. I cannot thank them enough for helping me out.

The shop splits a space with a nice cafe. We’d rolled in just in time for lunch. If I got it right, normally it’s just veggie (yay!). We had a kind of pasta salad lasagna that was very nice. 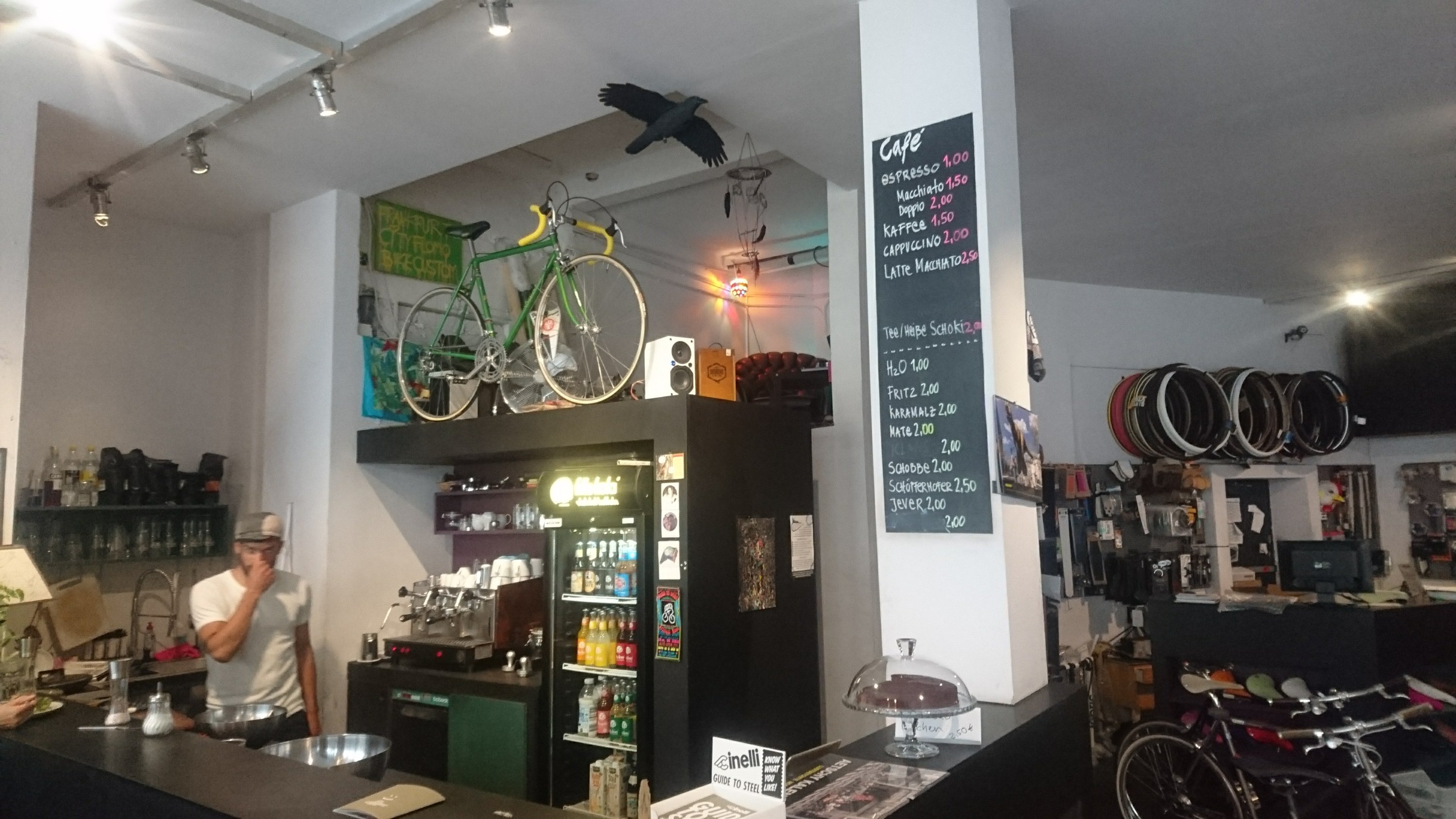 That afternoon Mo and I rode out to his new place outside Frankfurt. On the way we stopped for a nice view and the obligitory apfelwein. 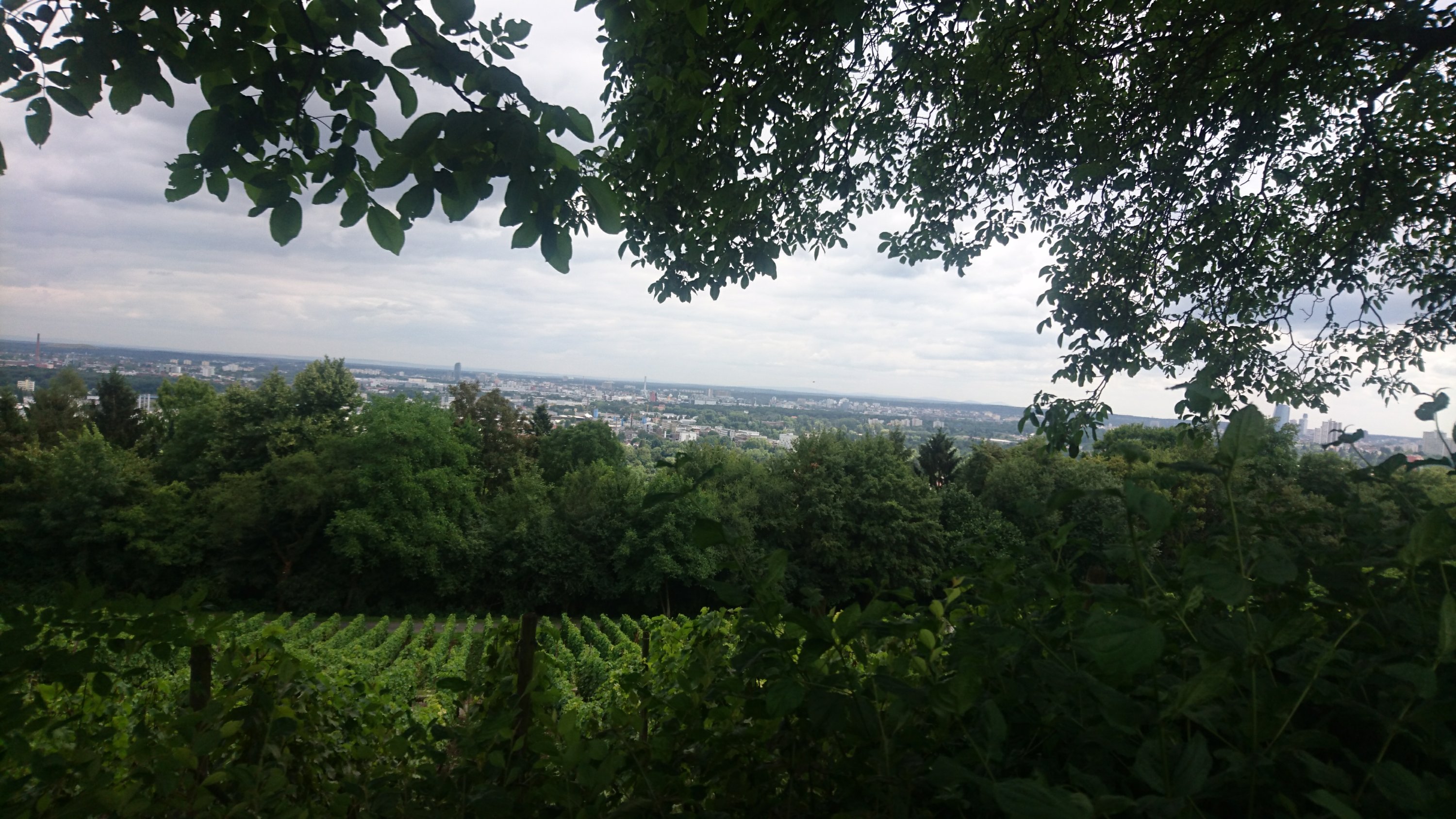 After this I headed back to the main station to catch my bus. I was left with a timley message on a poster in the basement. Next up, Freiburg to…. I have no clue where I’m going. 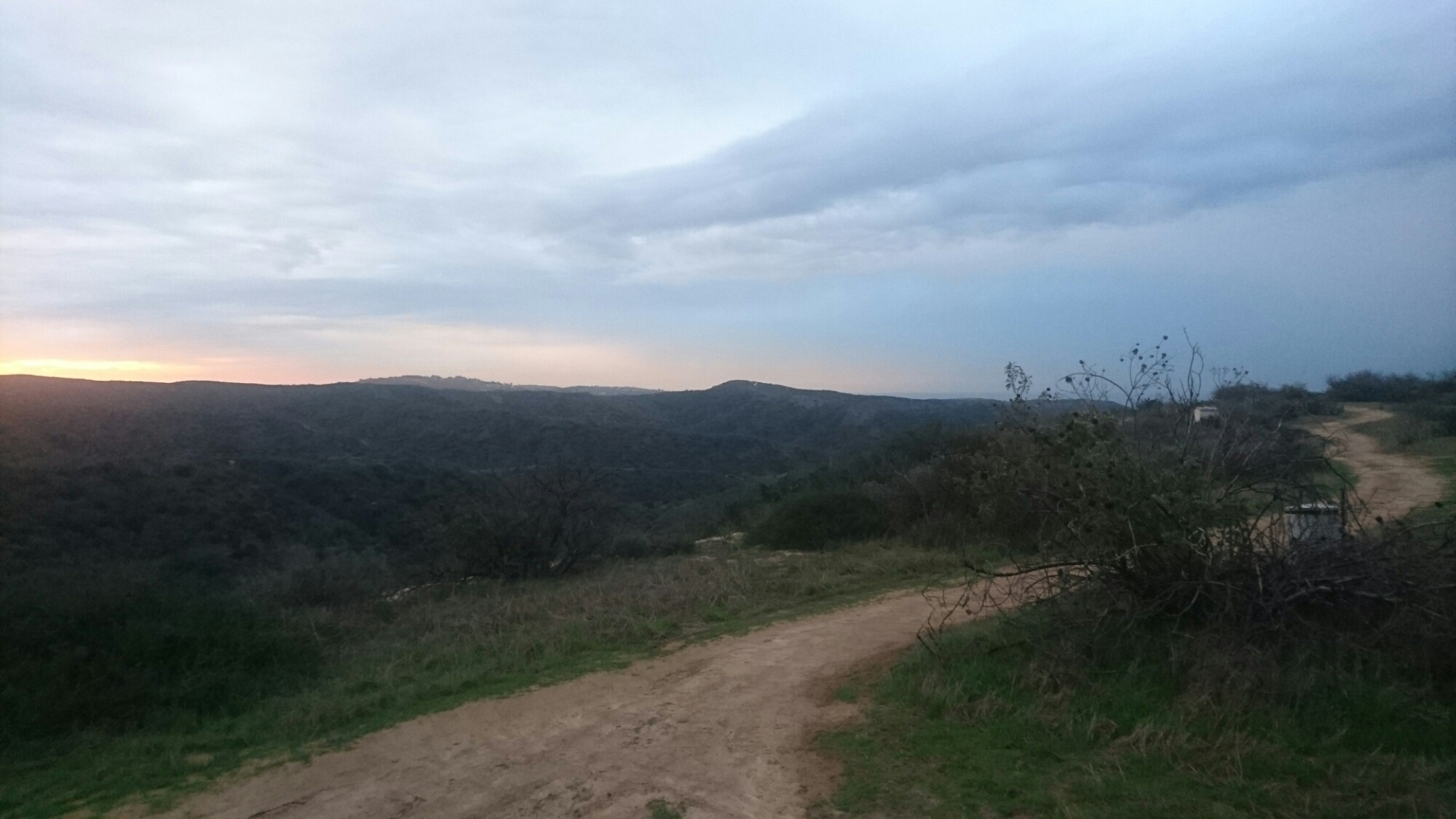 This is the first installment of Guinea Pig Kitchen. The most frequent questions I get asked about touring are generally related to food. Usually it comes down to, what do you eat? Since my first tour in 2008, I have put down about 15,000km touring and since that first tour everything has changed. Then I was on a track bike with an overloaded backpack eating at cafes and staying in hostels (or under the occasional bridge). Now I have 2, going on three tourable bikes (including that old track bike coming full circle), I own multiple stoves, switch regularly between tent and hammock camping. I would say I have my grub down pretty good.

I like food. I like good food a lot. I fancy myself a pretty damn good cook. When I became a vegetarian, half my life ago, my mom told me it was time to learn to cook. The memory mangled press worthy quote was a long the lines of “I’ve have too many children to cook for one that wants to be different”. So I have some practice.

OK, STFU now and talk about the food.

Shakshuka! This is a recent addition to my arsenal. A friend and fellow Team Moustacher taught me this one about a year and a half ago before we threw the Team Moustache Albany Bulb race.

Shakshouka (Arabic: شكشوكة‎; Hebrew: שקשוקה‎) (also shakshuka) is a dish of eggs poached in a sauce of tomatoes, chili peppers, onions, often spicedwith cumin. It is believed to have a Tunisian origin.[1][2]

This is as delicious as it sounds. Having realized last year carrying eggs isn’t as hazardous as it sounds I quickly adopted this as a touring food. This is my recent Hawk Overnight rendition along with some prep tips for short trips.

Since I was just doing an overnight I was only going to cook breakfast, this meant I could prep everything ahead of time.

Dice up all the veg, chuck it into your container, add seasoning and your preferred cooking oil for a light saute*.

Next you can optionally saute your veggies. It will be just as good if you wanted to chuck them straight into the sauce and soften them up there. Ideal if you want to minimize your cookware kit. Just leave out some or all of the oil from the previous step and give the veggies 2-5 minutes before adding the eggs.

Put your veggies in the sauce and bring to a simmer. Once its simmering carefully crack and drop your eggs in the sauce.

The eggs cook differently than normal poaching. I usually give it about 10 minutes with the lid on and the lowest simmer I can get my stove (MSR Whisper Lite) to do. This will vary between stoves and cookware but the egg should be much firmer than you’d do for something like Eggs Benedict.

My egg looks like a dumpling. But it is not, so serve with bread or toast.

Last step is find a beautiful view and enjoy.

In my journey through New Zealand I saw my fair share of hedge hogs. Cute little guys they are. Sadly the bulk of them resembled the bulk of… err… disassembled kangaroos I saw in Australia. So when I saw one if these lil’ fuckers rootin’ around the side of the road my protective instinct kicked right in. Right after a squee of joy! 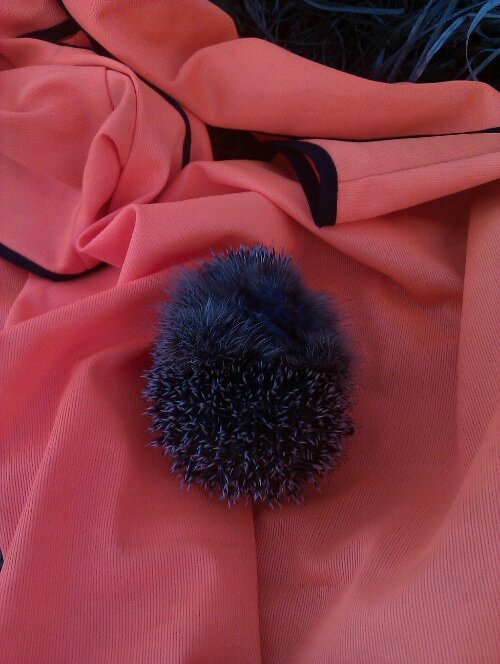 Be seen, be safe my little hedge hog. 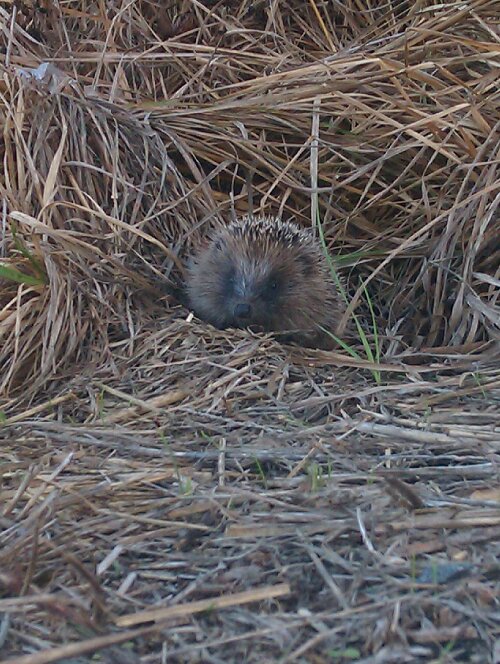 Now there is a happy and safe hedge hog. 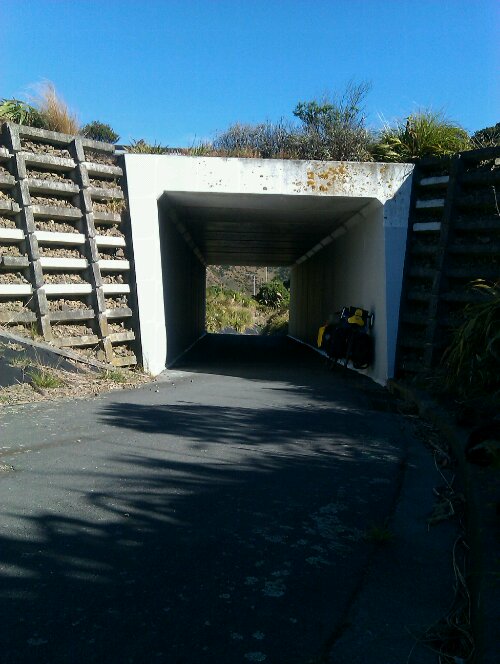 Heading off from Wellington where I’ve been almost a week. Three days riding should get me to Taupo where a mountain bike is waiting for me to ride Caters of the Moon! All up 919km to Auckland with a loop leading up to Comomandel and 15 days to do it. Couple big says and a couple casual days and I should be good.

Sumit of the Crown Range north-east of Queenstown. 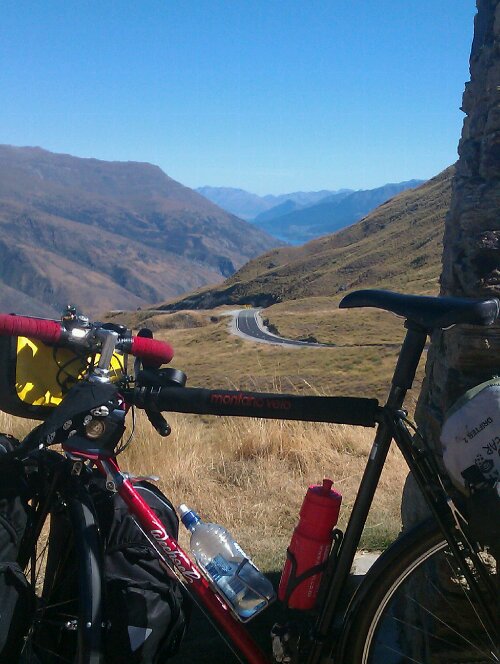 Lower switchbacks on the way up. 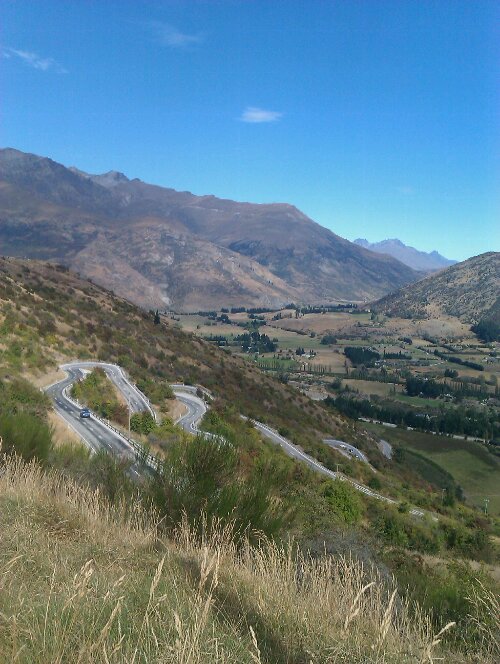 Just after brekky that is. 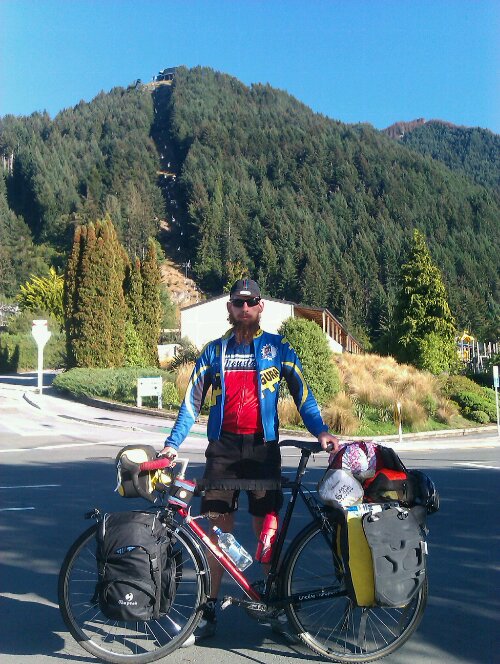 Queenstown has been amazing, look forward to returning.